I’m beeminding weight loss in a new way for me (though it may be very obvious to everyone else). Every previous time I’ve beeminded weight it’s been not weight but an input, like carb count, and it’s been for the duration of a specific diet. Like, I’m low-carbing, so start a goal to track that. Because inputs are under your control in a way that weight isn’t, and because I tend to start a Beeminder goal when I’m super motivated.

So now I’m pushing it up so that the Beeminder goal is a framework, not related to specific diets. The goal simply says I’ll lose at least pound a week over the course of the year, but it doesn’t care how. Within that then I may do several diets, or just eat sensibly, or exercise, or whatever. I may at times lose weight much faster than that rate if I ever do keto (and then I’ll probably retroratchet to bank those gains).

This seems to be a much better way of doing it, as it includes the likelihood of failure on any given diet within the framework. And quitting a diet before target weight no longer means I’ve “failed”, as the diet period was only a tool I was using for a while to hit the broader one-pound-per-week goal, not the ultimate goal in itself. So I’m hoping I won’t have those terrible motivation losses when I inevitably can’t stick to a diet for more than about 6 weeks.

Another reason I’ve had trouble with weight goals in the past is because Beeminder used to contract width of the road based on the flux of your recent weights, and my weight tends to be pretty consistent, so on at least one occasion it shrunk my margin for error to almost nothing, and I almost immediately derailed before I could do anything. Now they’ve changed it so there is no road for weight goals, and the distance from derailing doesn’t change unexpectedly so it works much better. 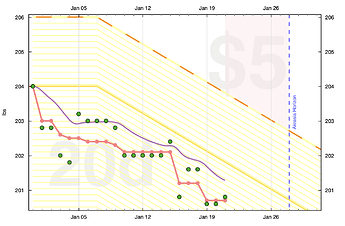 I’ve also got a second goal, which is a bit tougher in the short term, to get back under 200 pounds in January, as I hate being above 200. Not sure if it makes sense to have two weight goals (?), but I liked the purity of the 1lb a week goal and didn’t want to mess around too much with it.

Here’s the current progress on the short term goal: 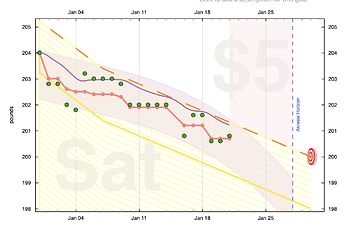 But my biggest worry with beeminding weight previously has been that I’ll procrastinate until I’m about to derail, and then it will be too late to fix it. Unlike most other goals, if you wake up over the road there’s nothing you can do about it that day, and you’re done for.

Except that I remembered @dreev talking ages ago about how you can, actually, fix it that day. So I Googled and read up on what he does, which is: if you’re over your road, then sweat and fast until you are back under by the evening.

Last year I experimented with IF, so this doesn’t seem as crazy as it used to

so I thought I’d try it. And last Saturday, as expected, I had an emergency day for weight on Beeminder, having woken up above the road and going to derail that day. I tried hard to bring the weight down in the day to make it so I would pass by the evening, and I did it! I skipped breakfast, didn’t eat much for lunch, and did an hour and 45 minutes of exercise, and didn’t drink too much in the afternoon. It worked! My weight fluctuated over the day like 202, 202.2, 203, 202, 201.8 (very close to the road), 201.6 (safety!).

(Regarding exercise: for Christmas I got an Oculus Quest, and I recommend BoxVR, it’s great.)

At 8:30pm I was VERY close to the road: only 0.005 pounds away (much less than my scale can detect), and I was VERY close to lying about it (what’s 0.005 lbs, really). Fortunately I remembered how bad an idea this was. And that if I just waited another hour without drinking or eating anything, I would probably dehydrate a little and lose a bit more, which I did.

So that’s the current situation. I’m not sure how often I’ll update this journal but it’s nice to be back

Welcome back! I love-love-love your story of edge-skating and eking your way onto your weight road by evening.

Not sure if it makes sense to have two weight goals (?), but I liked the purity of the 1lb a week goal and didn’t want to mess around too much with it.

I resisted having multiple graphs for one real-world goal for a long time. @bee eventually convinced me that I needed a weigh-ins goal to go with my weight goal. I wish Beeminder had a better way but for now I think there’s no way around it. Well, one way: if you can, outside of Beeminder, commit to getting on the scale every day, even if you have safety buffer and don’t strictly have to weigh in. Maybe psychologically, or with support from friends/family, you can make avoiding the scale when you have buffer be an ice cream truck loophole – one that you’re not tempted to exploit because it would immediately decimate Beeminder’s efficacy.

Actually, maybe it’s less of an issue for you since you’re losing a full pound a week (super intense, btw!) so you’ll rarely find yourself with much safety buffer. On my nearly flat weight goal, every time I weigh in even slightly below my road I get weeks of safety buffer. If it weren’t for my secondary goal forcing me to weigh in I’d put my head in the sand and back myself into a corner.

Anyway, so for me, I’m driven by my weigh-ins goal. It’s fed automatically by Withings and IFTTT and a custom aggday, so not at all newbee-friendly. It would also work fine to manually record +1’s for weigh-ins though.

My latest strategy, which I’m realizing I’ve made sound overcomplicated in other posts and beemails, is basically to start fasting 24 hours before your deadline so you can be quite certain that you’ll weigh in on your yellow brick road in time.

Bee and I both beemind our weight, fairly similarly, but in Bee’s case she feels weird and icky about it and doesn’t want to talk about it publicly. But she said it’s fine for me to talk about it, including how weird and icky it feels for her! I, in contrast, think beeminding weight is absolutely amazing and want to shout it from treetops. I think beeminding weight should be the bedrock of every weight loss system. People like me can enjoy the edge-skating and imposed random intermittent fasting. Non-ridiculous people can do Weight Watchers or go vegan or keto or paleo or, I don’t know, portion control and exercise, whatever, and just have Beeminder there keeping them honest. The goal for them is to never let Beeminder be binding. It is binding but if you let it matter that it’s binding then your non-Beemindery system failed and Beeminder is the failsafe.