I think it would be super useful to have something like this: 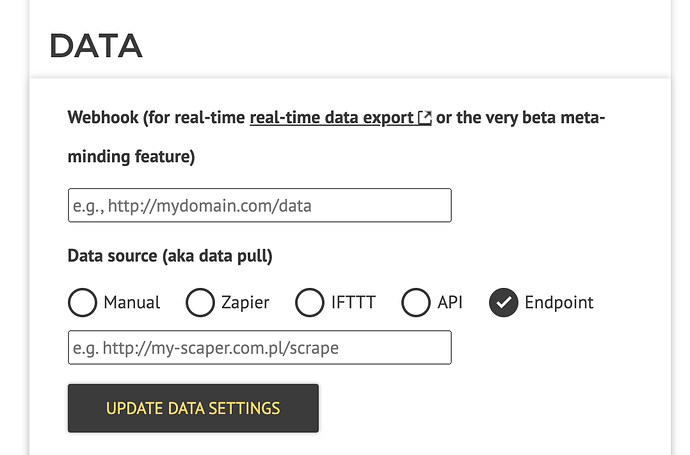 Currently, in order to create a custom data source that is called by beeminder, you have to set up the application, generate some tokens. If you do it, it’s not obvious how to share your integration with the others. You have to prepare UI for your app and store your users’ data in some safe way.

How about we could simply insert the URL that beeminder would call couple of times a day?

Nowadays there are plenty of free serverless environments for scraping (apify.com) or executing some code (dash.deno.com). Apify.com is very powerful in particular. You can ask it to open a website, log in, read some data and then the data can be sent to beeminder. So for example you can build integration with Memrise (read my points), Jira (find my tasks) or whatever. With Deno you can manipulate the data and merge multiple sources - so for example you can beemind urgency load, beemind total activities across websites (Anki + Memrise word count).

One workaround that comes to my mind is to do “push” again: to set up the automation to call all possible endpoints every X hours (like make.com) and update the data if there’s something new.

Does it make sense or it’s just me? If you find it useful, please let me know. Maybe there’s something I’m missing

I would absolutely love if this were a thing.

It does strike me, though, that dealing with timezones and custom deadlines might be tricky.

Could Beeminder provide the user’s timezone and goal’s deadline via get params or something? And then it would be up to our custom code how it handled that information…

I have a bunch of personal integrations I’ve written for Beeminder that Beeminder already calls on its own schedule.

The integration has a little web endpoint that wakes up in response to the request, checks the input parameters, gathers the data and replies by adding data to the appropriate goal with its own request a few seconds later. The sync button in Beeminder works fine, works on the apps…

It was a convenient enough model back when I wrote a bunch of those integrations (mostly before I did any development for Beeminder) but we could definitely make it better.

I try to do my best to keep up with low- and no-code services but there are too many!

Would it be more convenient if Beeminder were to keep the request open for 30 seconds for the service to get whatever data it needs and reply to the request with the datapoint itself, rather than using the request as a trigger to make a counter request? It would mean you wouldn’t need to have your Beeminder auth, I guess. If you wanted to use it as a trigger you could reply with an HTTP OK or something and that’d close the connection so Beeminder isn’t waiting for you.

Beeminder should probably provide the start and end timestamps of the Beeminder day in question in order to reduce the developer effort.

It may be slick for Beeminder to provide a unique handle each time it pokes the service that can be given back, if you use it as a trigger rather than just reply to the request. This could be helpful for troubleshooting, and probably other stuff that isn’t immediately obvious to me. I know that Heroku (RIP free tier) and Glitch et al sometimes have issues waking up in time, and having that back and forth record could be helpful. It’d be optional, so no harm no foul if you ignored it.

I know @narthur knows about this, but there’s another model I have been dreaming of for nearly a decade. I want an API endpoint that accepts a datapoint value. If the value were to change the “day’s aggregated value”, it adds that datapoint and replies with one response code. If it wouldn’t change the day’s datapoint, it doesn’t add the datapoint. (I haven’t thought through the value of updating the timestamp if it is a non-changer. Undecided.). This isn’t perfect for every type of data, but there are a lot of types where it would be awesome if someone’s random script doesn’t need to know anything about the goal. Who cares about custom deadlines, timezones, if it’s a new day, anything! Set up an automatic job to get the data and send it to Beeminder every ten minutes and forget about it. You won’t make pages of datapoints each day unless your data is really changing that often. Doing this today is definitely possible, but it’s silly how much work it is.

I’m just about wrapped up with a project I’ve been working on for two years now. One of the things I’ve had on the back burner is a demo personal integration that runs Playwright, does some browser interaction, scrapes a value, and gives it to Beeminder. Playwright has some decent tools for creation and debugging that require much less developer background than you’d think, and if I hooked it up as a template project on Replit it should be an even lower barrier to entry. It sounds like maybe the demo would be helpful even if I gutted the Playwright.

What do you folks think?

Thank you both for your comments

Also last datapoint or cumulative total so that you dont insert unnecessary datapoint.

use the sync button inside Beeminder to manually update the data like it works for official integrations.

If you wanted to use it as a trigger you could reply with an HTTP OK or something and that’d close the connection so Beeminder isn’t waiting for you.

This is the way imo. Reply with 200 OK and data will be inserted async. But indeed then we have to make a separate call back to Beeminder with datapoint.

personal integration that runs Playwright, does some browser interaction, scrapes a value, and gives it to Beeminder

Yep, this is what I want to enable as pull scenario. Running playwright / cypress / apify.com to scrape data, but Beeminder asks you, no need to run cron

Hmm, yeah… I can see how the trigger model would be a lot more flexible. Because then you could use the API to, for example, update the last week of data using request IDs.

What if Beeminder sent a temporary auth token along with its request to the endpoint? Maybe one that was valid for 5 minutes or something? That way the custom code wouldn’t need to store a permanent token if it didn’t want to. And it could be scoped to just that single goal, so the goalname and username wouldn’t even need to be specified. Not sure if that’s useful or not.

I think it’s important to specify the username and goalname, even if you were to do different auth things. Just from personal experience, many of my one-off integrations are one-off per service but have multiple Beeminder goals that are driven by the same instance.

@adamwolf Right, makes sense. Even if it was goal A that triggered my code, I might want to update goals A, B, and C at the same time.

Also, even if I only want each goal to trigger updates to itself, if I just got a temporary auth token with no associated goal name, I wouldn’t know which goal needs data.

Realistically, most of us have up to 5 (my guess) such integrations. What I do now is:

It’s simple and it works. You can execute all of this every couple of hours without coming close to free tier limits on both Apify and Make; note that my integrations are simple.

Hello guys, i like this idea of endpoint scraping a lot.

However I’d like to point out that y’all should be using ScrapingBee instead of Apify, for obvious reasons…

(disclaimer: I work for them)