Explain Purpose of the "Task Ratchet App" Integration with Beeminder?

I’m not sure I understand the purpose of Task Ratchet integration. I mean, I’m sure there is one, I’m just not sure what it is. Could someone explain a scenario (or a few scenarios) on how one would use TR integrated with Beeminder?

As I understand it, Task Ratchet allows you to create ad-hoc tasks (one time, ad-hoc commitment contracts) with a pledge amount of your own choosing, to be completed at a certain date/time. And of course, if you don’t complete it, then you pay whatever you pledged.

So for example, one use-case could be that you want to finish doing a chore you’ve been procrastinating on. It puts a quick fire under your feet, and I’ve found it to be very effective for certain one-off tasks. A favorite of mine is, “fold and put away my laundry within the next two hours or pay $20”. I’ll usually finish that within 10 minutes.

So yeah, I’m just not sure how people are using this with Beeminder.

Hopefully someone who actually uses it will respond, but one natural use seems to be to force yourself to actually use taskratchet, rather than just making an account and then never commiting to a task. The classic blog post about making goals whenever you buy something comes to mind.

In addition, I’ve found it useful to be able to have specific Beeminder goals that force me to make regular commitments on certain projects or areas of my life. For instance, a Beeminder goal that requires I make at least 3 work-related TaskRatchet tasks each day.

If you wanted to do MITs, you could have a Beeminder goal that would require you to add your MIT to TaskRatchet each day.

I think there is definitely a lot of improvement that I can make to the Beeminder integration, both in usability and functionality, so I’d be interested in hearing ideas for the integration that might not be possible yet, too.

@narthur What is MIT? Can you explain the data-flow of your scenario? How do you update either Beeminder or Task Ratchet (or both), and what data-flow updates the other, and how does that helps you?

I’m thinking there must be both a Beeminder task with a 7 day acrasia horizon, and a Task Ratchet task that has an additional penalty that you could control to be any acrasia horizon and any penalty amount you want. But I guess I need a concrete example of this.

I can think of one scenario integration with Beeminder. I could have a Beeminder goal that I want to be sure gets done early today. So I set up a Task Ratchet goal to do that, and when I mark the TR task done, it updates the corresponding Beeminder goal. Is TR-Beeminder integration flexible enough you can do that ad-hoc and point to any Beeminder goal you want at any time? Can it be forced to work with a specific Beeminder goal?

@poisson: I think you’re referring to Beemind What You Buy | Beeminder Blog. I can sort of see using integration to make sure taskratchet gets used. One could have a beeminder goal named “taskratchet” with a slope of 1, and integrated with taskratchet, you can set up taskratchet to update that Beeminder goal. I’m not sure what use this would be other than “make sure you use taskratchet at least once per day”.

Well now that I think about it, within a period of one week, there are SOOOO many little ad-hoc, one-off things that I might want to want to kick myself into doing. So I’ll probably create a Beeminder task to do at least one task-ratchet goal per week (with auto ratchet to 7-Day max). If nothing else, just to continually remind me that Task Ratchet is around to help me.

@narthur What is MIT? Can you explain the data-flow of your scenario?

MIT = Most Important Task. Basically, what’s the most important thing you need to do today.

How do you update either Beeminder or Task Ratchet (or both), and what data-flow updates the other, and how does that helps you?

Currently data only flows from TaskRatchet to Beeminder, and not the reverse.

The simplest setup is to specify a goal slug in your TaskRatchet settings that will get a datapoint every time you create any new task.

If you want a goal to only beemind certain tasks, you use tags. So if you want a specific task to post to a Beeminder goal immediately on creation, you’d add a tag like &mygoal. If you want the goal to receive a datapoint when the task is completed, you’d use a tag like *mygoal.

So, for example, I’ve created tasks like this in the past:

Which results in a task that posts to my work-tasks goal immediately on creation, and then posts to my email-zero goal when the task is actually completed.

All this is documented here, but I’m pretty sure it’s a confusing mess, so any advice on how to make this stuff easier to understand would be super helpful!

By the way, this conversation is making me think I should use TaskRatchet, with a beeminder goal to back it up…I will set it up tonight.

I completely agree with you 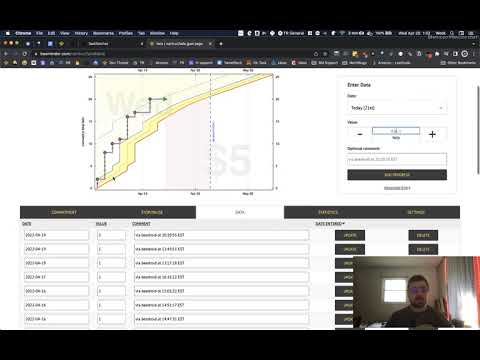 Well that was quick, lol! Thanks, that really helped!

If you want the goal to receive a datapoint when the task is created, you’d use a tag like *mygoal .

Thank you for this. Super helpful intro.