Good call on the Anti-Magic violation there! Our thinking (probably before formulating the Anti-Magic Principle!) was that beyond the orange, blue, and green lines, the yellow lines are really just to shade the good side of the Bright Red Line, so we have heuristics based on what seems to look good. If we wanted to be more dogmatic about anti-magic… I’m not actually sure how we’d satisfy the aesthetic desiderata. There’s probably some way though!

I have to think harder but I’m tentatively standing by the design choice here. Again, good eye spotting the issue!

Oh, and for your use case, does it work to just do everything in terms of the raw number of safe days?

Yes, I’m really watching the exact number of safe days (37+), but I liked the YBR-nostalgia of watching/being in lanes.

Indeed, my guess was that this was an aesthetic issue. It’s clear to see how the degenerate case, where only part of a single yellow line, or none at all could be confusing. I’d say shading could be accomplished by actually shading in a light yellow, with darker lines overlaid.

In practice, one could say that currently every goal’s good side is marked by a different “shade” of yellow. I’m talking about the emergent shade (caused by the density of yellow lines) that’s especially apparent when looking at the graphs in thumbnail form. Maybe some people are depending on that shade to get some kind of intuition about the intensity/slope of the goal (flat forever goals tend to be really yellow) or maybe the gallery would look bland with only a single shade of yellow? But maybe it’s something to consider experimenting with? Maybe a unified yellow shade results in a cleaner and less noisy design feel?

But, obviously, I’m not entirely convinced myself that showing the weekly lines is really an important design goal. The shading argument might stand on its own though. See this graph, for example, with inconsistent “shading”: 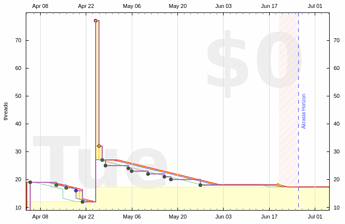 See this graph, for example, with inconsistent “shading” 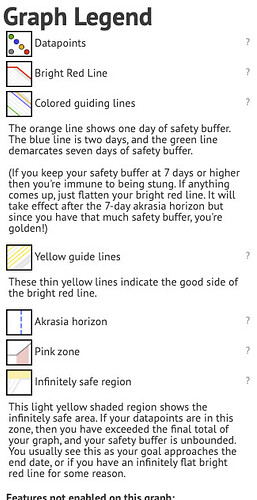 Funny, I was talking about the parts that (seem to) remain white (due to the weird road shape).

An update about beeminding my urgency load / attempting to reach 7 days of buffer (green is the new orange).

The confusing situation with gmailzero reminders.

My take on bookminding (very close to the gold standard).

Not committing to anything, but let me know if anything sounds interesting (don’t expect blog post quality material).

I am voting for this one because it stands out - probably because I played with proselint a couple of days ago and I am primed on “lint.”