The Beeminder app manifests itself like so on my home screen:

Taping it reveals this:

Now… where does this “2” come from? What does it want to tell me? 2… what? I doubt it’s referring to the two orange goals. Besides those two there is only one red goal, the rest is blue or green (or grey because the app once again decided to stop fetching data) and both are many more than just two.

Given my previous record with this app I’m calling this a bug. Please enlighten me as to what this badge number is trying to tell me.

Maybe you have two alerts for beemergencies that weren’t cleared?

Yes and no! Wikipedia to the rescue. Turns out German, Lithuanian, Dutch, Danish, Norwegian, Polish, Romanian, Estonian and Swedish do this. Though it is only the first two which capitalise it.

British English uses “No” instead of “No.” for that matter.

As a famous national football player once said “Again what learned”. Not that I care much for that sport, but his Denglish is very quotable.

I “fixed” this in the title by using the corresponding unicode symbol. Now it definitely looks weird.

I was sure there had been a UVI for this at some point but I’ve meticulously grepped http://beeminder.com/changelog and came up empty. @zedmango’s theory sounds plausible, that it’s just showing the number of undismissed notifications… 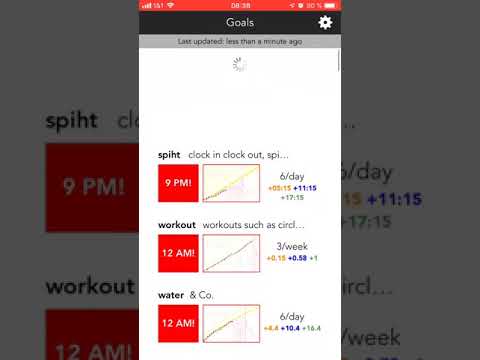 I have first terminated and then freshly started the app as well as cleared all notifications prior to the recording of this video to give it the best chance at beehaving.
As you can clearly see the app is… quite broken. Refresh doesn’t work (no matter how hard I try

) , the boxes next to the graphs turn grey once they scroll out of sight, the badge app icon (what this bug is about) does not correlate to anything, there are no notifications whatsoever on the phone.

(P.S. It was YouTube that suggested ‘Comedy’ as category for the video