([Being able to turn No-Excuses Mode on or off at any time] does defeat some of the point, like locking yourself in on a newly created goal. We have a solution to that coming: You’ll be able to instantly archive and delete any goal that has $0 pledged on it. If you want to lock yourself in, just bump it up to a non-zero pledge. Again, that’s not the status quo yet, just what we have planned. We’ll likely prioritize it based on how many people tell us they really need a way to lock themselves in on new goals.)

That was @bee’s stroke of genius, that if you wanted to lock in a goal – remove the ability to delete it even if it’s less than a week old – that we could just make pledgelessness be the criterion. Any $0 goal, no matter how old, is instantly deletable. Any >$0 goal, no matter how new, you have to schedule it to archive in a week (and then can delete fully if you want, as in the status quo).

That has at least 3 advantages:

I was convinced enough to say it was our plan to implement it. But then I thought of this slightly longer list of disadvantages:

Basically, we prefer to entangle the locking in of a new goal with neither No-Excuses Mode nor pledgelessness. So let’s make it its own thing! Namely, a “lock me in” button next to the “delete now” button that just dismisses the whole DELETE GOAL interface. For anti-magic, the DELETE GOAL section should not totally disappear but collapse to a blurb that says “This goal is either more than a week old or you explicitly locked it in, so you first have to schedule it to archive before you can delete it.”

(That transparency also may mean we could experiment with other criteria for expiring deletability. Maybe to be deletable a goal should be less than 1 day old AND have a $0 pledge AND not have No-Excuses Mode turned on AND not have had the lock-me-in button pressed. Probably not all that, but we’re free to experiment, is the point.)

Similarly, the ARCHIVE GOAL section is never missing and you’re free to use it to schedule an archive even in the first week. (@shanaqui has a nice use case for this.) 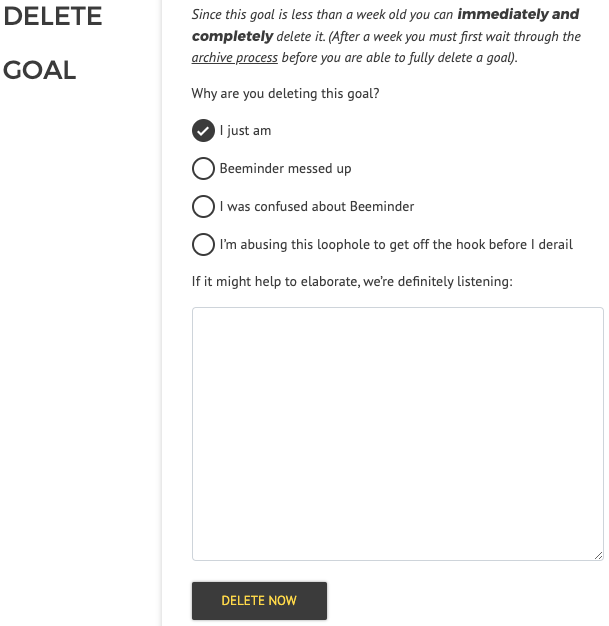 I think that satisfies literally every use case we know of in a pretty elegant way?

One thing it misses out on is a proposal from @alys to simplify deletion-vs-archiving. Namely, make deletion only work for already-archived goals but whether archiving happens with a one-week delay or not can be conditional on the goal being more than a week old, like in the status quo. That’s indeed much more elegant than having a choice between archiving or deleting (or, worse, the status quo of having one vs other conditionally available). But even though disagreeing with @alys is historically a terrible idea, I’m thinking her idea is incompatible with CON3 and CON4 above. Or at least a bigger redesign would be needed to make it compatible?

In conclusion, I think we should have an explicit lock-me-in button that makes the whole goal deletion interface go away, decoupling it from No-Excuses Mode. But maybe only if any of you (@mary?) tell me you’d use it…

If this change was made, would that mean that archiving a zero-pledged goal is impossible?

Ah, yeah, to review the possible things we may do, assuming we conclude that we need a way to lock yourself in in the first week at all (which y’all should chime in about!):

Now that I’m thinking it through more carefully, thanks to your question, I think option 1 is off the table for now because we don’t want to mess with the interface we have for deleting a goal in the first week. Unless @bee or anyone has ideas for getting the best of all worlds there.

I like the idea of decoupled lock-in and Excuse Mode behavior. I’m a newer user so it’s harder for me to conceptualize the long-term consequences of this plan. As a new user, I tend to lock myself in prematurely, so I like having an option to seriously lock myself in or to just excuse proof myself until I feel confident in the parameters and entry method I selected for the goal.