When you click the graph from the main page you get a zoomed in graph, but there is no way to get from that to the data entry page, could there be?

Not really a bug but an aesthetic thing - iOS turns the background of PNG logos to black, which would be fine if it couldn’t decide between the two while app switching, video shown below. Perhaps having the iOS icon be solid white would solve those two aesthetic issues? (iOS not liking transparencies/ defaulting to black background looking a bit naff?)

Yeah, it looks like Apple is very much not in favor of transparencies in app icons. I’ve done as you’ve asked, and made a sold-white-background version of the icon, just for Apple.

You may need to remove the Altbee icon and re-add it (or something like that) to see the new white-backgrounded iOS icon, but it should be there.

(It rubs me a bit the wrong way to do things specially just for Apple (as opposed to building things according to web standards, and leaving the browsers to render things accordingly.) But I guess this isn’t so bad, all things considered.)

Oh, and by the way: thanks for the suggestions and comments on Altbee. It helps a lot, and it’s always gratifying to see other people using and enjoying the thing I built.

Not sure if this is an iOS specific problem, but I can’t seem to input decimals in the data field for a goal. 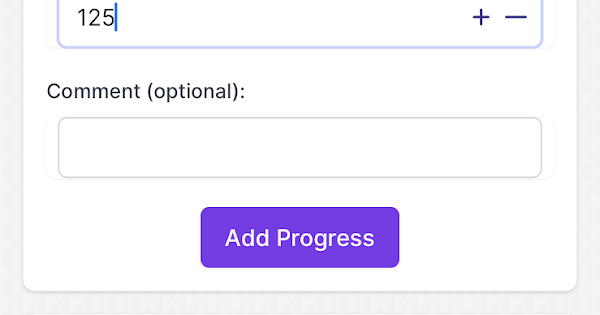 Sorry about that, fixed.

Turns out that iOS doesn’t have a decimal point on the inputmode="numeric" keyboard. I’ve changed it to inputmode="decimal", which should work properly on both Android and iOS.

Altbee now supports filtering by tag—yes, really. Check it out: go to the Beeminder tags page, add tags according to whatever categorization schema or taxonomy you feel is best, then you’ll be able to filter your Altbee dashboard according to these tags.

In the past, I said a few times [1], [2], [3] that I needed API support for tags before I could implement this feature—but it turned out to not be that hard to do the impossible and fetch tags even without such support. I still really would like formal tag support to be added to the API, if only so that I can remove the somewhat dumb and hacky workaround which I’m currently using behind the scenes.

Not that for now at least, Altbee can filter by your tags, but not add them. So to add or edit your tags, you’ll still need to visit the official Beeminder tags page, which isn’t particularly easy to find. So I suggest bookmarking it or the like, or simply remembering the URL (not actually that hard!)

This sounds like a great idea, but how do I know it’s secure?

Would you be willing to open source it?

The original post speaks to that: Anyway: go check it out and see what you think of it. (And/or go read the source code : it’s completely open source.)

Oops. Reading comprehension. Thanks! I will.

How did you filter by tags when it’s not part of the API?

Aha! I was waiting for someone to ask that!

The answer is this API endpoint, the fact that the goals’ tags are included in data- attributes on the Beeminder home page, and some HTML parsing with Floki.

Here’s the code that makes all this happen, if you want to take a look.

A new feature—if you’ve added tags to your goals, you can now use them to group up your goals on Altbee.

Instead of having one big grid of goals, you can now use tags to divide up your goals. It’s not quite one section per tag, though you could do it that way too if you really want to—you can group goals with one of several tags together, and so forth.

You can define any number of goal categories, and for each you choose one or more tags, and each goal with one or more of those tags is included in that category’s section of the main page. (A goal can fall into two (or more) such sections, if its tags match for both.) There is also a main, catch-all section, with all the goals that don’t fall into any of the groups you define (plus all the red goals, so as to ensure that you keep them top-of-mind.)

This is all entirely optional, though it actually seems to work really well. The result is a UI that scales to many more goals than before, solving such problems as for instance described here.

Try it out, but first you’ll need to add tags to your goals. It’s probably a good idea to add tags anyway, if you’re using Altbee—using the filter box to filter by tag is quite a useful feature in its own right.

Currently matching tags works in Altbee as “match any”.
Feature request: support also “match all” (where one can filter on more than one tag and a goal much have each tag to be matched)

Rather than forcing the default (catch all + red), perhaps that could be an initial filter which one can then deactivate in Settings / Goal categories.

I do intend to make a lot of this more customizable in the future.

Feature request: support also “match all” (where one can filter on more than one tag and a goal much have each tag to be matched)

That’s a good feature to have—I’ll probably add it at some point soon.

Rather than forcing the default (catch all + red), perhaps that could be an initial filter which one can then deactivate in Settings / Goal categories.

But one thing I intend to do in the future is have a checkbox on the settings page to control if red goals are included there. I like it the way it is, but I’m not averse to having this be a configurable option if others would prefer to not have the red goals up at top.

OK. Understood. How about listing the catch-all after all the custom goal categories?

Do you particularly want that? If you arrange that all your goals fall into one or more of the categories, and if you disable the inclusion of red goals in the catch-all section, you’ll end up with a catchall section that is always empty, and thus is never shown.

If I understand you correctly, this is more or less what you’re aiming for, right?

If the catch-all were listed with the others, I would move it around accordingly. As is, it is first and I created the filters to highlight a few in particular.

I was not planning on tagging all of my goals nor was I planning on creating goal categories for all of them either.

The catch-all is nice and makes sense. For me right now it has higher prio than the ones I specifically tagged and grouped via tags because the catch-all is very much not empty and first.

Would you also be adding “due in” filtering? One could then create a further filter criteria to filter based on when the goal is due - today beemergeny, tomorrow, this week (within the akrasia horizon), or later.

I have a couple feature requests:

The origin of the datapoint should be present for the datapoint and since we authorize Altbee I would guess this shows up as such. It does not show up in the comment text itself but does appear when hovering over the datapoint listed in the Beeminder webapp.

From the sounds of it, you would like the comment’s text to also contain ‘via Altbee’.

The origin of the Beeminder iOS app shows up as ‘beemios’, for example.

(edit: back from the dead; scheduled delete canceled; thanks for catching it, zzq )

If the catch-all were listed with the others, I would move it around accordingly. As is, it is first and I created the filters to highlight a few in particular.

I was not planning on tagging all of my goals nor was I planning on creating goal categories for all of them either.

Ah, got it. My impression from what you said earlier was that you wanted the catch-all group to be something you could remove and replace entirely with your own categories. But OK, I see, what you actually want it for is to be able to sort the categories such that some are before it.

That’s an interesting suggestion—I’ll have to think about it. It doesn’t quite fit with the way I’ve been thinking about it until now, but it could be quite an interesting feature. On the other hand, the point of it including the red goals were for the red goals to be at the top—if the catch-all group is buried in the middle, that kind of defeats the purpose of that.

Would you also be adding “due in” filtering? One could then create a further filter criteria to filter based on when the goal is due - today beemergeny, tomorrow, this week (within the akrasia horizon), or later.

Don’t the colors already solve this problem? I don’t really see this as a goal-categorization issue… but I don’t know, maybe it should be.

Allow entering data from the main page. As it is, you have to click on each goal to enter data, which makes it frustratingly slow and inefficient. There should be a field where you can just input datapoints from the main page to facilitate rapid data entry of many goals.

I’ve been meaning to get to this at some point. With my particular workflow this isn’t a major issue, but I know that it’s a generally useful feature.

Put the date and time of data entry in the comment field by default, and add “via altbee” so users can keep track of when and how data was entered (beedroid does something like this, but oddly without the date, which is important to have)

As @krugerk pointed out above (but then deleted?) Beeminder already keeps track, automatically, of this information. It’s in the tooltip you get when you hover over a row of data on the Beeminder goal page.

This information isn’t shown anywhere in the Altbee UI itself, in part because Altbee attempts to be somewhat minimalistic. (Given that one can always fall back to the Beeminder website for the more obscure kinds of information.) But I’d be open to showing it in the Altbee UI somewhere, maybe, if you feel that it is important.

But I really don’t think it’s appropriate to put that information also in a comment. Not only is it redundant, it also takes over the comment field, which is supposed to be user-controlled. It drowns what might be useful data associated with each data point in a sea of formulaic details.

Allow deletion of multiple datapoints at once, rather than having to click delete on each individually

Interesting idea. Yes, I could see this being quite a useful feature.