Beeminding Sticking to a Schedule

Over the last couple of years I’ve been trying to figure out a good schedule for my days that I can stick to. Some influences here have been the Focused and Nested Folders podcasts and the Start Finishing book. I’ve been trying to block out time on my calendar for work/exercise/leisure so that everything has a place and my life stays balanced. I’ve often thought that it would be nice to somehow beemind sticking to the schedules that I create but could never quite figure out how to do that until I read:

I’ve changed my First Things First goal to be a custom goal with the aggregation method set to truemean (an average). A few times a day I assess my performance and enter a datapoint straight away (any decimal in the 0 to 1 range). I have entries in my daily routine to remind me.

This made me realise I could ask myself a few questions after each “block” on my schedule to assess how closely I adhered to the schedule. And whilst I find random popup reminders through the day annoying, a reminder asking me how I’ve done at the thing I’ve just been doing and perhaps hinting that it’s time to stop before I get tired of it is welcome. The questions I came up with were…

Were you doing X at the beginning?

Were you still busy when the block ended?

…and the numbers there are designed to sum to give a 0-100 score. I didn’t spend more than a few minutes coming up with these questions and whilst I might refine them a bit in the future I don’t want to make the questions or scores overly complicated. I want them to be answers I can dash off in a few seconds without having to stop and think.

So the obvious thing to do (to me at least) was to make an iOS shortcut that I could use to quickly answer these questions and send the score to a Beeminder goal.

Focus Calculator iOS shortcut This shortcut asks for a quick text description of what kind of thing you’ve been doing, asks the questions, adds the score up and sends it on a stayfocused goal at Beeminder. (And yay for the iOS app now making it really easy to share Beeminder shortcuts without having to mess about with API keys etc.)

And then I wanted to add reminders to popup to tell me when I should be finished with a block of my schedule.

Focus Checker iOS shortcut This looks at all my calendars for the next 12 hours and if the title of the event contains “Block” (e.g. “Focus Block”, “Walk Block”, “Leisure Block” which means it’s some time I’ve scheduled to do something, rather than an external appointment) then it adds a reminder to pop up at the beginning and end of that block.

Focus Hour Counter iOS shortcut I realised that it would be simple to cheat the schedule by making it very minimal so I added another automation to count the number of hours blocked out each day and send the total to a focushours goal. I currently have that set to 3 hours/day while I figure out what the sweet spot is.

I’m quite pleased with the system after the first week of using it. I had no idea what kind of score to aim for as an average but after the first few days it looked like 65 was a decent target for me, low enough that I can build up a safety buffer, high enough that I need to pay attention or I won’t hit it. My actual scores are all over the place, though I haven’t yet got down to zero.

I accidentally ratcheted away too much buffer when changing the slope of the graph and needed to hit high scores for the rest of the day which really concentrated my mind! But I’m happier now I have a bit of safetly buffer. 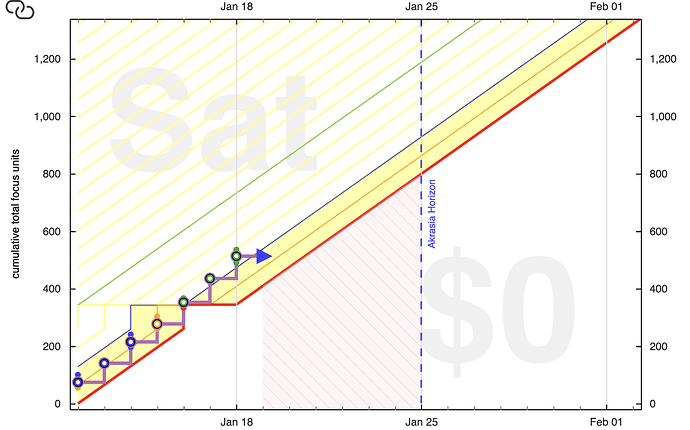 Definitely interested in feedback on this. Let me know if you’ve tried something similar, are interested in trying something like this, if anything doesn’t make sense or if you can spot any loopholes!

Yes, this is fantastic!

@k1rsty I love the questions you ask yourself and the scoring. That’s a clever way of making the assessment more formal and reliable. I’m thinking about doing something similar for myself now.