The Glorious November by aard

I have plans for November - I want to increase the value I get out of Beeminder.

I’ll do that here for a little extra accountability. Perhaps I even get some inspiration from you folks.

Beeminder works very well for me for some goals but not for others. While I’m fine with this in general, I had some goals that I really wanted to get working well, but didn’t manage.

So that’s what I’ll be busy in November.

I had a small success with the “fresh start effect” in October. I want to see if it will repeat.

I also don’t want this topic to feel like I need to keep it alive forever.

As is customary, this all starts with a meta goal.

That brings me to… I won’t link to any of my goals. My Beeminder username reveals my identity a little bit too loudly 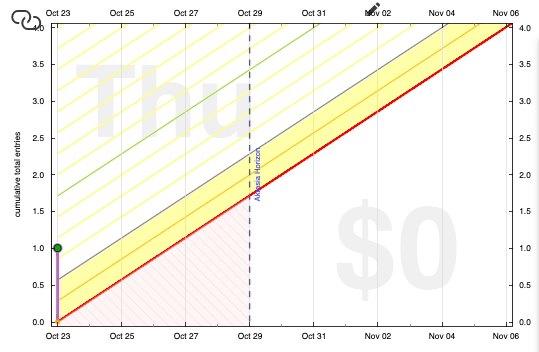 Autodata works very well for me.

I’ve become a runner partially thanks to Beeminder-Strava integration. 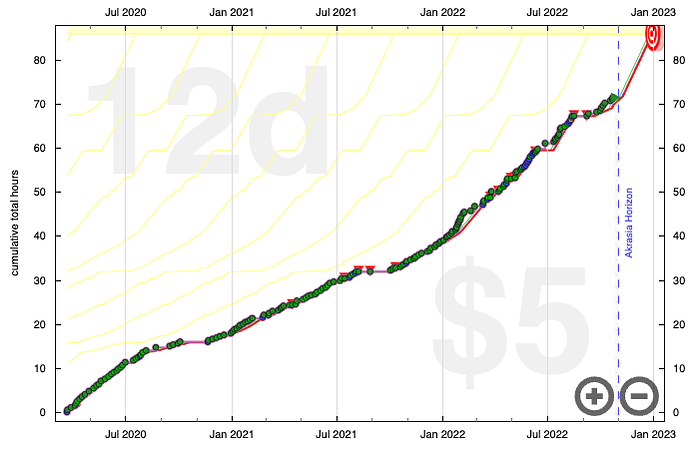 Prior to March 2020, I was still upset at the expensive running shoes I didn’t use enough. (I bought the shoes in 2015 with my first significant income.)

This has been my most successful goal. It’s also the one that I’ve been most consistent on.

Several aspects of the goal

“I want to increase my running duration.” approach to “I want to stay healthy.” worked initially very well. 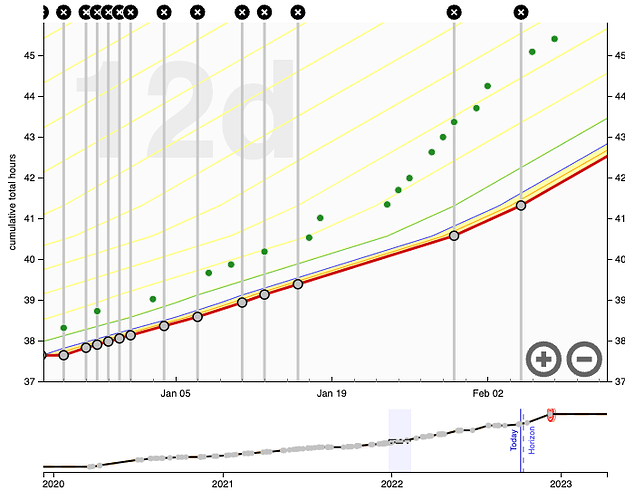 Quickly I arrived at the idea that 31 hours/year was ridiculously low! Later, I ended up with segments on this graph with 88 hours/year regions. What a poor judgement in January, I thought.

So I created another goal, tracking number of times I’m running per week. 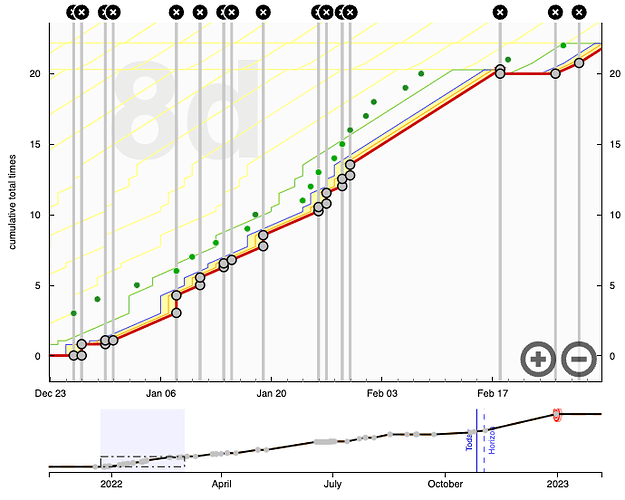 And notice I didn’t pay Beeminder much (initially), focusing on the number of times helped enough.

I’m currently at 44 hours/year. Still more a more ambitious rate than the initial. I’d like to stick to it, but I won’t hesitate to dial it down. I already hit my goal.

So now I approach “I want to stay healthy.” from “I should go out and run more frequently.”

In the period where I got overly ambitious, I paid “a lot of” money to Beeminder.

Part of that cost definitely translated into more runs (or running hours) so I can justify as gym membership + “cost of running on a treadmill”.

The other part made me realise I got stuck again. The new approach wasn’t able to sustain my ambition. In that period, I noticed I enjoy particular runs way more than others.

For instance, cycling out of city to run on a trail by a small river felt much nicer. This then became “running out of city”. Then I added “reaching that farm where they have great bread” or “go for the quiet corner to take a calm dip in the river in the summer”. (I ended up running the longest I ever had in my life. And half of the way I ran with a huge loaf of bread in a bag in my hands.)

Maybe something like “take the bus/cycle to a park/forest you’ll enjoy running in” may be a good idea for a Beeminder goal. (It’s not autodata but once a week, while I’m using my phone on the bus/bike, a manual +1 should be okay.)

Alright let’s get to work!

My idea of a Glorious November '22 is as nebulous as it gets. It’s a combination of nebulous goals!

I think of each nebulous subgoal as “measuring one aspect” of the nebulous Glorious November goal.

Cinema used to be a source of pleasure for me. This resurfaced recently. After a few times I noticed this, I bought two subscriptions to give myself more opportunity: Mubi and Cineville.

Since then, I’ve spent about 130 Euros for watching 8 movies. Per movie, that’s 160% of a ticket to at a movie theater with a comparable selection (and I wasn’t selective, any movie would do). I’m comfortable with the extra cost in this case: I found most of them very pleasurable, and here I am at a very Beemindable situation.

Since I’m convinced I’d like to try and get in touch with cinema again, I want to Beemind this. The reason I’m not able to act in line with my conviction really seems to be just a misjudgment of alternatives when I’m making decisions.

So last week I created a goal: Use Cineville subscription at least at the rate where it’s reasonable to keep it. For me, right now that’s 2 movies/month. 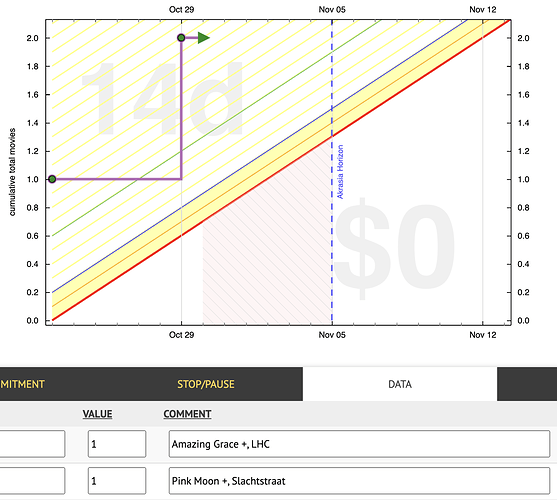 I like that I can add arbitrary comments to data points. If this goal sticks, I’ll definitely want to convert these into Criticker scores.

sponsored by a Beeminder goal

I’ll be picking up some old goals this month, too!

I’m turning 30 this month. A medical doctor friend reminded me that I’m approaching the period where I’ll start losing muscle.

Until my initial motivation fades away, increasing the rate and adding auto-ratchets will tempt me. I’ll resist both in November.

I started and stopped my 2 or 3 pushup goals. I know better than to get easily ambitious by now.

I have a pattern by now: Start easy, realise it’s too easy, increase the rate or add auto-ratchet. When the initial motivation is clouded, run into trouble. Then lose motivation, feel bad for paying money and stop the goal.

I cycle between periods of working 100% from home and doing that down to 1-2 day/week. Ultimately, going to the office is the cloud that covered my initial motivation for these my earlier pushup goals.

In a period of working all week from home, I’d start with 10 pushups/day due by 11:00. Then, I’d get ambitious quickly. When I’m at the “office” part of my cucle, my mornings get filled with (the) stress (of catching an early (emptier) train in the Netherlands these days). Then I’d derail a few times, finally move the deadline to something “generous” like 19:00. Then I’d derail a few times more, because of afterwork socialisation, an incident etc and move the deadline to 23:00.

Lesson 1: I hate doing pushups at 23:00 about as much as like doing them at 11:00.
Lesson 2: I need a way to get unstuck in my ways. On this point, I have expectations from having committed to this thread.

I’ve never been a “todo list” person, despite wanting to be one. “One must do” goals haven’t worked very well, either.

I think two reasons played into this:

I’ve been meaning to get better at this. So, about a month ago, I figured I’d give it another shot.

This is a goal that gets a +1 each time I do either of the following on tasks tagged with next in Todoist.

I have a rule to keep this focused: Nothing that I’m Beeminding separately (e.g. running, but also things like watering plants) don’t go into Todoist. 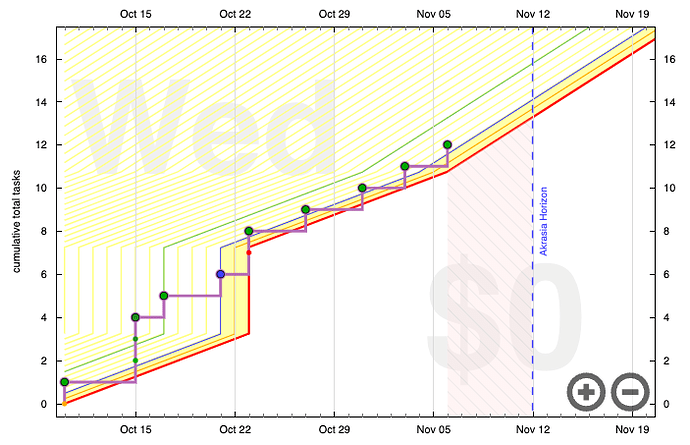 I use Todoist’s inbox to capture anything. This has been great.

I often experience surges of interest in things: books, articles, blog posts, podcast episodes, random project ideas, etc… This surge is especially powerful when I should rather be working on something that gives me an ugh-y feeling.

I addressed that by using my Todoist Inbox very liberally. These days, I’ll click an interesting link, or end up a Wikipedia page that I want to read, then hopefully realize what I’m doing and move it into the Todoist Inbox, instead of using my “interest” to avoid stuff.)

I still want my Todoist Inbox to stay useful. So I empty this weekly: 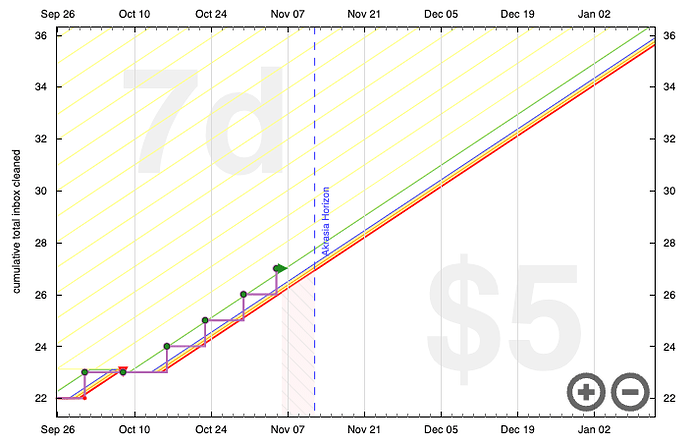 By emptying, I mean just the act of making sure the Inbox is empty. Anything counts: moving tasks to a Todoist Project, deleting, or actually consuming the content.

Until now, this has been great because I get to (1) hoard things as I desire (2) not use them as excuses to avoid other things.

Help: how to freshen Todoist?

So freshening it is pretty difficult. Anyone with tips?

Running while on vacation

Despite having just railed on (one of) my running goals, something worth noting: I’m taking my running gear with me while travelling!

Having the red line while packing my bag was definitely helpful here!

I’m traveling to a place that’s not inspiring to me for running. So I’d like to also take the chance to try and get a bit creative. So I immediately updated my graph after the derailment: 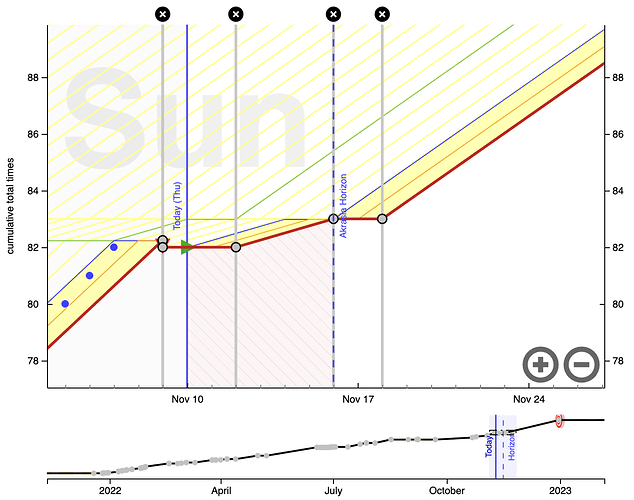 I find Dutch banking industry unfortunately slow with innovation. Unrelatedly, I was looking for an excuse to fiddle with AWS lambda and serverless software development… so I wrote a simple integration to track some of my spending.

I feed in a CSV export of my transactions. The integration then (1) categorizes transactions and (2) posts data points for the Beeminder goal relevant for that category. 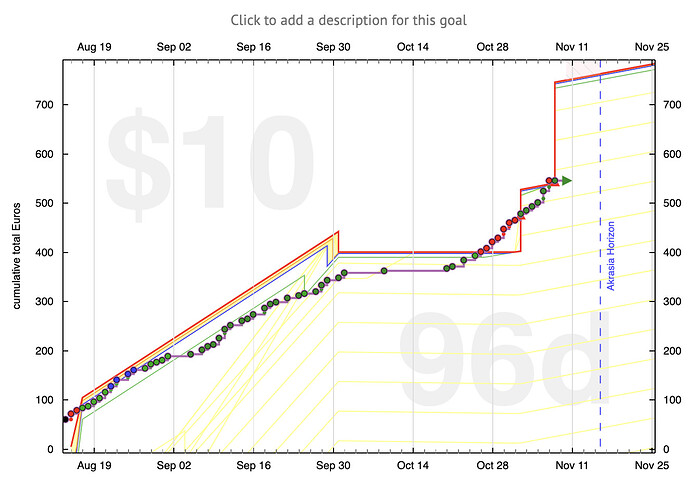 Since it’s not autodata, it’s easy to “derail in past” if I slack on entering data. 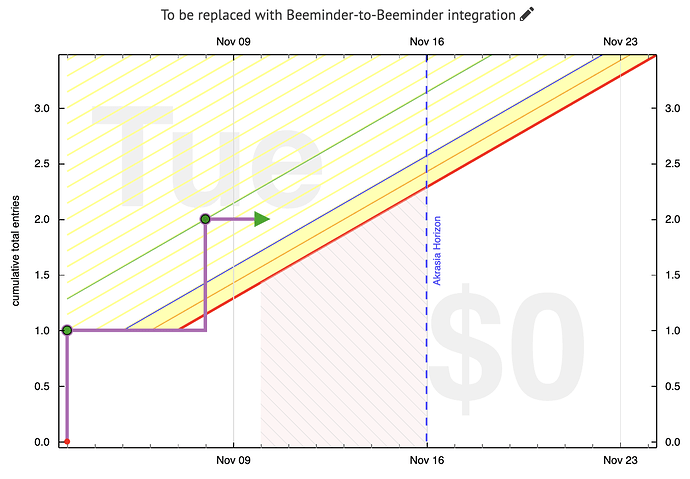 I’m somewhat frustrated with my job. I’ve become unhappy and demotivated, especially over the course of past 6 months. This reached a point where I could not get myself to apply for new jobs. So I have a goal now: 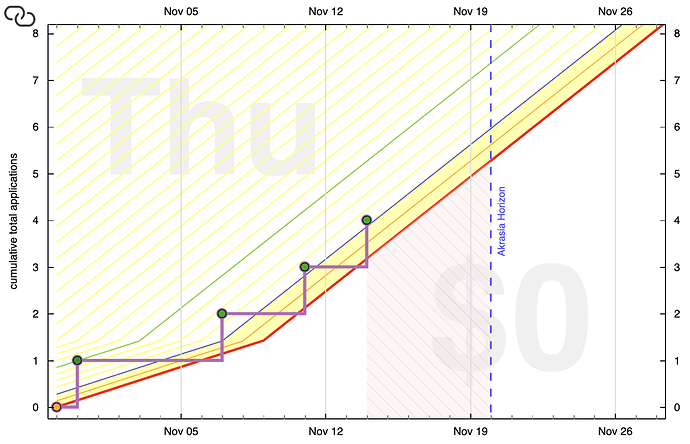 I’m especially happy that I started it with a “very low rate” (1 application/week) considering delay of success decreases my life satisfaction quite a bit. I’m now at 2.45/week which is… a fractional rate where it doesn’t make much sense, except it puts me on a rate much better than 1/week and a rhythm I can handle.

(I’m also thinking of ways to reevaluate my relationship with my work. I hope I’ll be able to share something about that too, soon.)

I had a series of derailments, thanks to an excuse I found: “I just travelled the whole day back.” I did have time and energy when I was back, but well, akrasia (and $0 goals).

To begin with, the meta goal of this topic derailed

It is indeed very cumbersome to do this manually.

Despite that, I did freshen a lot of items. So I’ll keep the goal at half the rate: 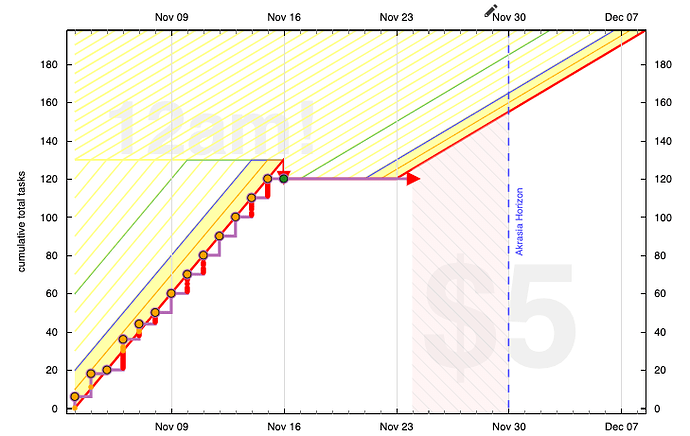 Although I’ve lost some motivation, I’d still like to see this become a (personally) usable alpha version by January, ideally.

No graph yet, since I apparently messed up data entry via Toggle.

I did get some confusing feedback from the market. And I may have resolved to first get a mortgage and then change jobs, due to some mortgage rules where I live. So I may just keep this goal flatlined for the next month.

I’m trying to keep this topic easy to read for people that are not me! Maybe this format helps for updates on goals I’ve already introduced here?

My goal for November was to see how the increased rate feels: It feels (too) easy. During the past month, I’ve effectively kept making a “baseline measurement”. 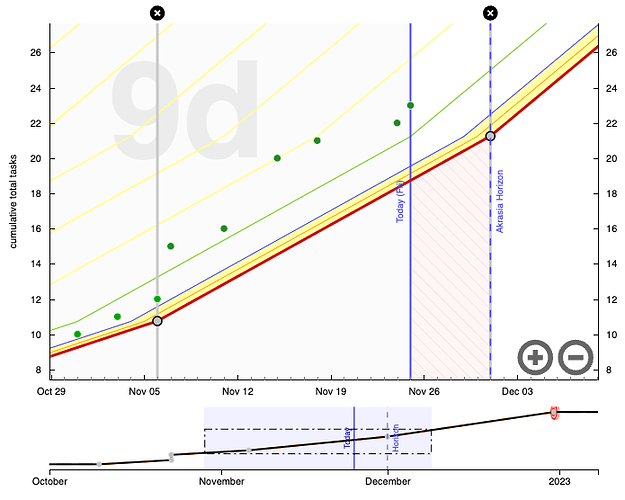 This is a large increase and it’s in conflict with one of my goals here: “don’t be tempted by large increases, they’re unsustainable and reduce long term returns”. I’m putting that aside: this is a high priority goal.